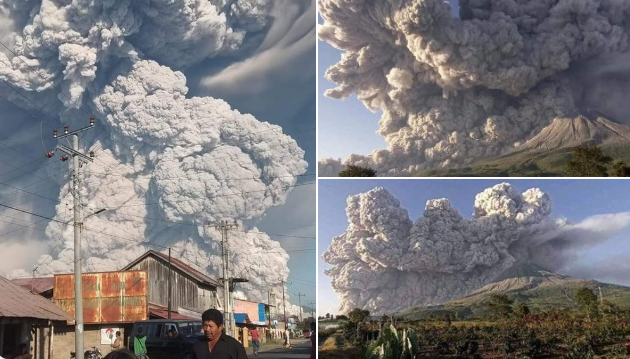 About Mt. Sinabung we wrote already last year /https://mkweather.com/indonesian-supervolcano-mt-sinabung-erupted-next-eruptions-could-significantly-cool-down-the-climate-during-next-months//, when it already appeared, that supervolcano is preparing to explosion VEI4 – VEI5, which should significantly make Earth around -0,1/-0,2°C colder. These numbers appear negligible, but they should change circulation patterns in the region in favor to colder conditions and some effects should appear in more distant regions too.

Mt. Sinabung has a potential to explode up to VEI6 strength of explosion, what means, that it is not fully excluded cooling effect around -0,5°C on the Earth, in the future.

Sinabung had roared back to life in 2010 for the first time in 40 years. In 2016, seven people died in one of the eruptions, while another in 2014 killed 16. In late 2018, a volcano in the strait between Java and Sumatra islands erupted, causing an underwater landslide and tsunami which killed more than 400 people.

After 2000, only one eruption with power VEI5 has occurred – Pueyhuey Cordón Caulle in Chile, 2011. In 2010, Icelandic Eyjafjallajökul with power VEI 4 scared Europe.

The most pessimistic scenarios count with VEI6 during 2021, 2022 and the next years, with possible cooling planetary effect around -0,5°C, but VEI4-VEI5 – more realistic explosions of these years can cool down planet around -0,1/-0,2°C.