The worst is situation in Maui region, where is reported the most serious floods and landslides.

Thanks to current AO- phase, not only cold blasts in Europe and Northern America are still forecasted, but Hawaii reports cyclonic activity, too.

Situation is so bad, that state emergency has been declared in Oahu and Maui, after homes have been destroyed and tourists seriously affected.

Evacuations were ordered and many residents were completely destroyed, according to inhabitants "their fully rebuilt is needed".

On highways, many landslides have appeared and together with flooding water they caused many accidents or problems.

In Haleiwa, near Honolulu, 4000 has been bothered by "life threating" conditions.

Two people were swept away in raging waters on Tuesday, 9. March 2021 according to The Guardian.

"The climate crisis is causing changes to Hawaii’s rainfall patterns, according to scientists, with overall levels falling but downpours becoming more extreme when they do arrive. The state is also vulnerable to rising sea levels and more intense storms, which bring flooding and saltwater inundation of freshwater supplies." The Guardian wrote.

More intense T-storms are a worldwide problem, which is affecting many regions in the world thanks to climate change, nowdays. If situation makes worse until 2100, more deadly floods from record rainfall events we shuould expect almost in all territories, where global warming trend is significant. 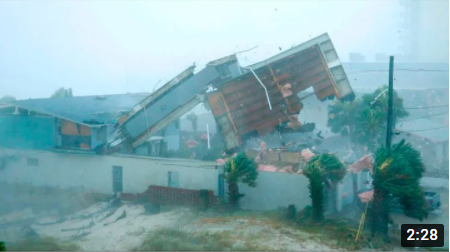