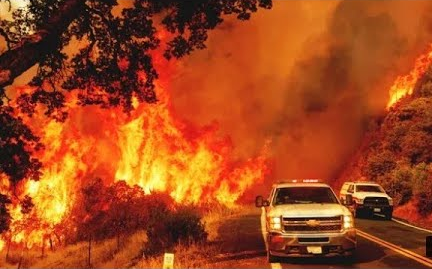 Only in a few last articles we have informed about extreme heatwaves, which hit in March 2021 Mexico.

Before a few days, +46,7°C was measured https://mkweather.com/hot-air-from-mexico-467c-has-shifted-above-florida-35c-virginia-30c-and-new-york-28c///, what is only 1,3°C from all-time March record for the country, and not so long ago, +44,1°C was measured in San Luis Potosí /https://mkweather.com/after-an-easter-a-heatwave-from-mexico-to-southern-canada-possible-mexico-441c-western-texas-with-fire-risk-already//.

Moreover, extremely hot tropical air is preparing to shift across the USA and Canada towards Greenland and severe drought, the first heatwaves and wildfires are possible between 3.-12. April 2021 in parts of the USA and even Canada /https://mkweather.com/extreme-heatwave-will-shift-from-mexico-to-greenland-the-first-hot-times-in-the-usa-and-canada-between-3-12-april//.

Currently, after extreme heatwaves, widespread wildfires threaten Mexico, including the biggest cities, e.g. Mexico City, or Monterrey in the north.

The worst situation was reported before a few days from Nuevo Leon region, but gradually, dozens of wildifres started to spread across populated areas in the country.

According to Mkweather Spring 2021 forecast, extremely hot and dry spring is forecasted for northern and eastern Mexico and southern states in the USA /https://mkweather.com/spring-2021-forecast-for-north-america-2021-mk//. It should be a remnants of effect La nina in the region.

During AO-/NAO-, tropical air masses are strengthening in this season and when AO+/NAO+ will come, these masses are shifting into northern regions.

Now, heatwaves are shifting into mid-latitudes, including Europe /https://mkweather.com/wednesday-brings-summer-paris-27c-frankfurt-am-26c-london-25c-wroclaw-24c/ and North America /https://mkweather.com/extreme-heatwave-will-shift-from-mexico-to-greenland-the-first-hot-times-in-the-usa-and-canada-between-3-12-april//.