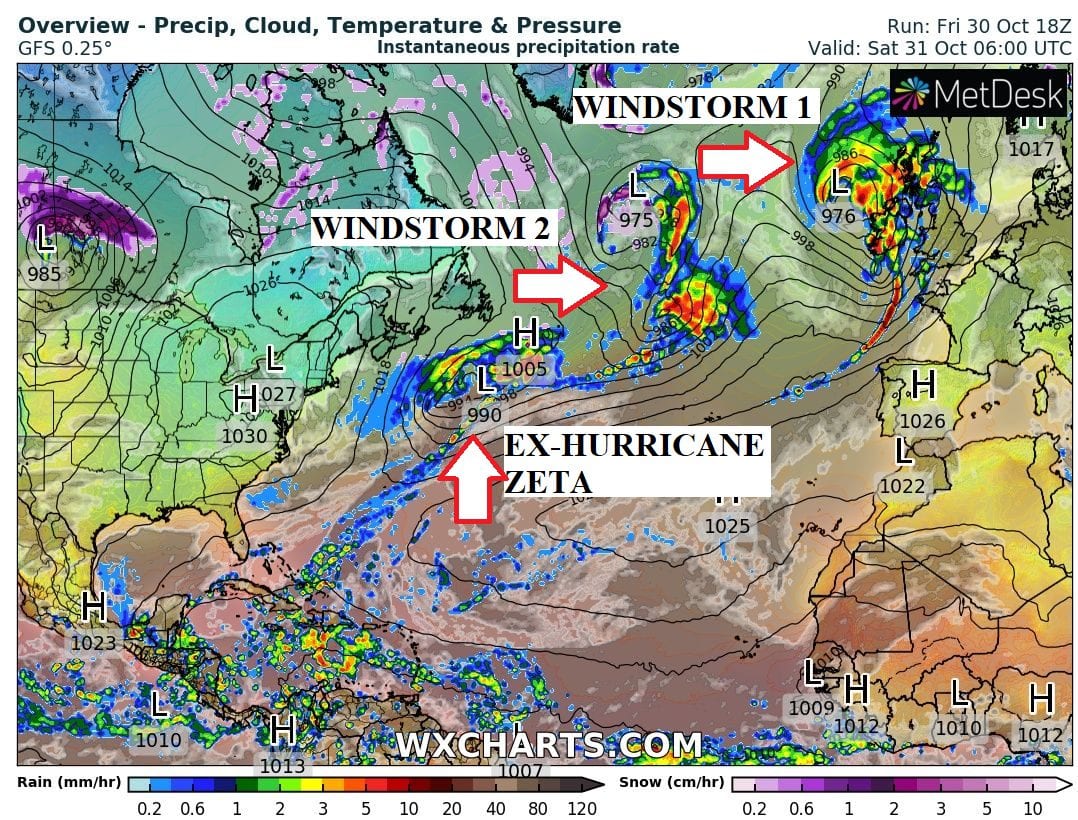 Although ex-hurricane Epsilon was associated with weaker winds over Europe lands such was expected and had stopped closely before British Islands /https://mkweather.com/2020/10/26/epsilon-after-alpha-already-the-second-tropical-storm-which-hits-europe-in-2020//, but its cold front brought the largest hailstorm in the World ever (Libya, Tuesday, 27. October 2020) /https://mkweather.com/2020/10/29/worlds-largest-hails-20cm-from-cold-front-linked-with-ex-hurricane-epsilon-supercell-storm-in-libya//, next 4 powerful windstorms hit / hits Europe until the end of current week.

The first windstorm hit northwestern Europe already from Thursday to Friday, 29.-30. October 2020, with extreme winds in Netherlands (Lauwersoog, 198 km/h), but too in the UK (Aonach Mor, 141 km/h). Storm has caused wind gusts over 100 km/h far away from NW Europe, e.g. in Czechia or Slovakia, but only in the mountains.

After this windstorm, next 3 deep pressure systems are shifting from Atlantic over British Isles, Scandinavia and western and northern coasts of continental Europe at the weekend, 31. October – 1. November 2020.

One from these systems already hits British Islands, with winds up to 178 km/h in Cairngorm, 151 km/h in Cairnwell and 120 km/h in South Uist Range. Belmullet in Ireland has reported 115 km/h and Poine Du Raz, France 109 km/h. Be careful in Central-European mountains too, with wind gusts up to 130 km/h in borders of Poland with Czechia.

Next 2 windstorms hits British Islands already during next hours and the second one will be ex-hurricane Zeta, probably with a power of a tropical storm – after tropical storms Alpha and Epsilon possibly 3rd tropical storm in impacts in Europe in 2020. Ex-Zeta in Europe will be a topic of the following article.