Home›Articles›News from the Arctic: extremely warm these days!

News from the Arctic: extremely warm these days!

In period 29. April - 4. May 2021, very high positive temperature anomalies are expected in Canadian Arctic, Greenland and Russian Arctic, too.

In Canadian part already have been overcame all-time April temperature records (Eureka, -1,9°C and Grise Fiord, +3,4°C) and similar scenario is possible in many parts of Arctic in next days.

Arctic Amplification climate feedback is often, mainly in winter, but too in autumn and spring, associated with NAO- and AO-, when cold air masses from the Arctic are pushed into mid-latitudes in Europe, North America and Asia, while northernmost latitudes alone stay very warm.

According to Severe Weather EU, an unusually strong warm wave headed for the Siberian Arctic Ocean, raising surface temperatures more than 20 degrees above normal during the 3rd April 2021 decade.

According to another watcher, zombie fires are loving these warm Arctic conditions.

Warm Arctic is associated with methane (CH4) emissions from melting permafrost, too, what is considered such as one of the biggest threats of climate change until 2100.

During circulation like this (warm Arctic, cold sectors of mid-latitudes), long Rossby waves often hit subtropical and tropical regions, while another their meanders are shifted above Arctic and subarctic climate zone.

Already around 10.-15. May 2021 we should transit into NAO+ / AO+ phase, when stormtracks and Rossby waves will shift back into northern latitudes and with them too subtropical belt of very hot air.

Arctic is during NAO+ / AO+ colder, while many parts of mid-latitudes hotter, although, stronger heatwaves are possible during NAO-/AO- and persisting NAO+ / AO+ have in some regions tendency to be more stable (e.g. in summer in Central Europe not heatwaves with +38°C, but only +32°C...).

We will see soon, how strong will be heatwaves in Europe in the first half of May 2021 and what contribution on them will have NAO, AO and creating pressure fields from Greenland to Sahara and what possible NAO+ / AO+ brings into mid-latitudes in the USA, Canada and Asia. 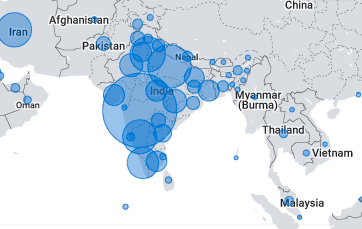