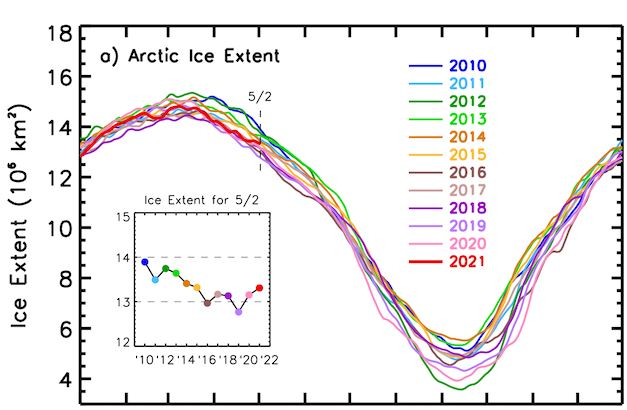 These, La nina-driven conditions have significant impact into temperatures around whole world including Arctic.

The Arctic Sea Ice Extent is currently higher than it has been since 2014 thanks to anomalously cold Earth.

“Arctic sea ice extent is the highest in the last seven years; also higher than fifteen years ago and seventeen years ago.” commented watchers on Twitter.

April ice extent is decreasing at 2.63% per decade.

Relatively cold conditions in Arctic were in April 2021 were enhanced by anomalous circulation in Euro-Atlantic sector /https://mkweather.com/a-big-european-circulation-anomaly-in-2021-totally-oppositely-such-as-in-the-world-and-showing-what-climate-change-should-bring-until-2100//, with persisting Arctic cold blasts in region of influence of Gulf Stream in North Atlantic, Europe and large part of the Arctic.

Unseasonably cold atmospheric circulation was very probably a reason of limited decrease of Arctic sea extent loss in mid-Spring 2021 in many Arctic sectors.

If circulation won´t change and cold weather around Earth, including Euro-Atlantic Arctic persists cold in May and June 2021, we should temporarily reach a status of years before 2010 in the Arctic, according cold variant estimates.

Global warming is therefore currently returned back, at this moment in long 7 years, back to 2014.

La nina phase is forecasted all year 2021, but hopes for El-nino are alive for 2022, what should bring back warm conditions around the Earth, with frequently drought, wildfires and heatwaves.

Year 2021 until then, will bring many cold temperature records, yet, very probably.