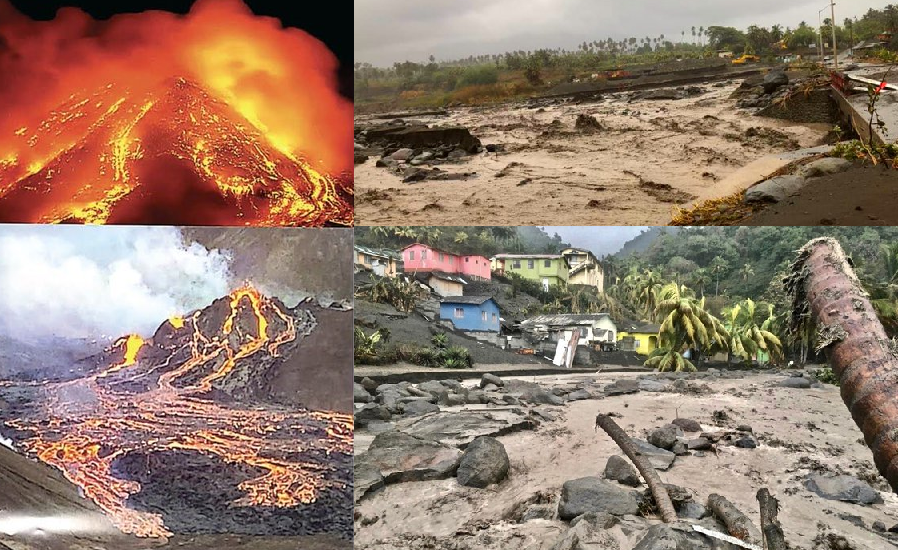 After a volcano erupted on the Caribbean island of St. Vincent (main eruptions on 9. and 12. April 2021), approximately two-thirds of the island is covered in a thick layer of ash.

Gradually, evacuation of 20 000 people have started. According to The United Nations, “about 20,000 evacuees on island are currently in need of shelter“, and warned of a humanitarian crisis together with COVID crisis.

The activity pattern of the ongoing eruption is comparable the event that occurred in 1902, with a Volcanic Explosivity Index (VEI) of 4.

With VEI4 power, a volcano is the next in series of eruptions in last months, which should have some contribution together with La nina and minimum of current solar cycle to colder conditions on Earth in 2021.

In hardly devastated island, the next natural hazard appeared at the end of April 2021 after heavy rains hit the region.

A lahar is a violent type of mudflow or debris flow composed of a slurry of pyroclastic material, rocky debris and water. The material flows down along a river valley.

The worst affected areas were in parts of the main island of St Vincent. with rainfall accumulations ranging from 75 to 125 mm during a 6 hour period on 29 April 2021.

As the 2021 Atlantic hurricane season inches closer, the erosion caused by lahars (destructive volcanic mudflows) could be even worse accrording to globalvoices.org.

In 2021, the next powerful hurricane season is according to long-term forecasts expected /https://mkweather.com/hurricane-and-tornado-season-2021-in-the-usa-above-average-expected-thanks-to-la-nina-forecast//.