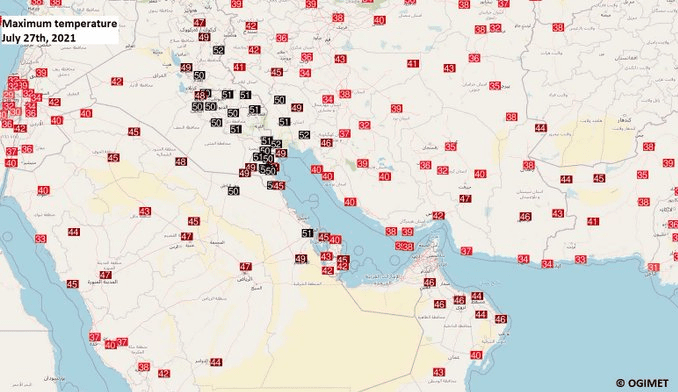 An extreme heatwave is reported at the end of July 2021 after the flooding period across the Middle East.

The hottest is in the Persian Gulf region, where maximum temperatures in the last days and hours reached more than +50°C – in Iran almost +53°C!

The flood situation was caused by an anomalous low-pressure anomaly above Sahara, northern Africa. After rounds of storms, the next dose of extremely hot air from the west has arrived and temperatures after a break are reaching near-record levels.

Near temperatures above +50°C in UAE, artificial creating of rain is possible and sometimes applied during summer heatwaves.

Meanwhile, in India, the death toll from monsoon rains in the Mumbai region increased above 200 and from Italy, Balkan and Eastern Mediterranean, the next heatwave is moving above parts of the Middle East.

All-time temperature records for Asia from Iran and Israel have values +54,0°C (Ahvaz, 29. June 2017 and Tirat Zvi, 21. June 2942), therefore in the next few days, the region will be very close to continental temperature records and heatwave should threat sensitive groups of the population.