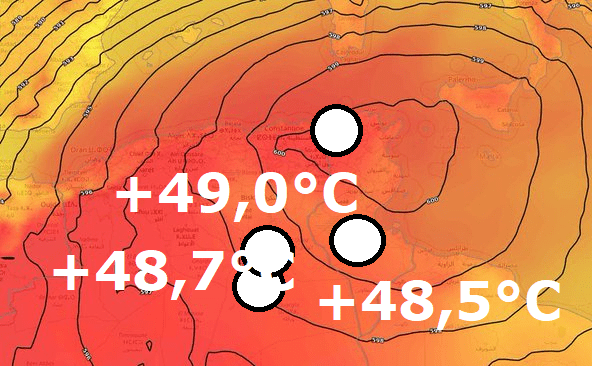 Only in one of the last articles, we warned about extreme heatwave forecasted for large parts of Europe between 10.-25. August 2021 /https://mkweather.com/the-peak-of-summer-2021-mediterranean-47c-alpine-and-carpathian-region-42c-scandinavia-and-the-uk-maybe-the-last-30c-mega-heatwave-starts-on-11-august-in-western-europe-and-ends-around-24-august-in-ea//.

Above southern half of Europe, but too Central Europe and partly northern Europe will shift anomalously hot air from North Africa with a Saharan origin, which is already causing problems in North-African countries, mainly Tunisia and Algeria, where already all-time temperature records in metropolitan areas were measured.

In the next period, gradually temperatures up to +47°C are expected in European Mediterranean – Spain, Italy or Greece.

In northern Africa, maximum temperatures should reach in the next few days around +50°C and the next all-time records are possible.