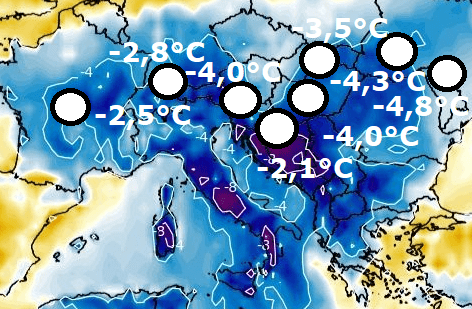 On Friday, the strongest frosts have shifted eastward, above south-Central Europe, southern France, Italy, Balkan, and Ukraine, but below zero was in the Baltic region, the rest of Central Europe or still Spain or even the UK.

The coldest from the station within International Exchange Database was in Soroca, Moldova, -4,8°C.

Fulophaza in Hungary surprised with -4,0°C and the same temperature was measured in Weitensfeld, Austria (the same city on Thursday -4,2°C).

Polyentes Casyc in Spain reported -0,7°C (-4,9°C in Spain on Thursday) before a beginning heatwave.