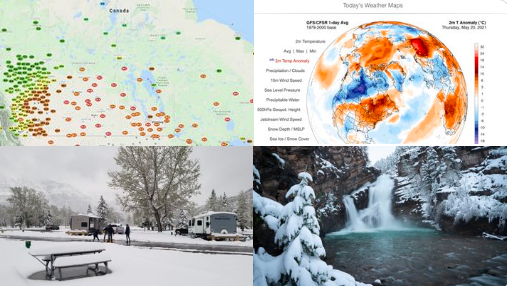 Last workweek in Canada was wild, with tropical temperatures in one province (in Saskatchewan, before an arrival of cold front), but heavy late-season snowfall in neighboring province (in Alberta, including capital, Edmonton, after cold front).

Extremely strong cold front is forecasted to bring snowfall even to northwestern and northern USA, mainly to Montana, Idaho, Washington and Oregon next days.

On the other hand, Moose Jaw & Bratt’s Lake, Saskatchewan reported tropical +33,4°C only short time before a snowfall in Alberta.

Meanwhile, in the Atlantic, Hurricane season 2021 is forecasted to start already at the weekend, with the first named tropical storm, Ana and even possibly second tropical storm, Bill in Gulf Coast /https://mkweather.com/2-possible-tropical-storms-in-the-atlantic-one-hits-gulf-coast-already-in-next-hours-one-is-moving-toward-europe// and Midwest suffered the next storms, with hails and tornadoes in last workweek.

In Midwest, the next storm round will begin soon, after cold air will shift above the region, with possible severe storms between 23.-29. May 2021, with possible hails, tornado outbreaks, floods or damaging winds and East will be warm – Canadian metropolitan area near Great Lakes extremely warm.

Summer 2021 should start extremely warm in western USA and western Canada and cold in central USA and Canada and eastern USA.